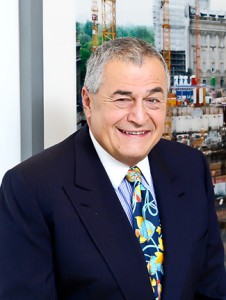 Tony Podesta is founder of the Podesta Group, the largest independent government relations and public relations firm in Washington, D.C.

A former articles editor of the Law Review at Georgetown University, Podesta served as an assistant U.S. Attorney in the District of Columbia. Earlier, he was director of admissions and a political science instructor at Barat College of the Sacred Heart in Lake Forest, Illinois.

During the 1980’s Podesta served as founding president of People for the American Way, the constitutional liberties organization founded by television producer Norman Lear and prominent clergy, educators, business executives and civic leaders.

He has appeared on major broadcast and cable networks and his writings on governmental, legal, educational, economic, and cultural issues have been published in The New York Times, Washington Post, Los Angeles Times, Newsday, Baltimore Sun and other leading newspapers.

A former counsel to the late Senator Edward M. Kennedy and a frequent advisor to former President Bill Clinton, Podesta has provided leadership and strategic guidance to a host of politicians.

Podesta takes an active role with many civic and arts groups nationwide having served as co-chair of the Community and Friends Board of the John F. Kennedy Center for the Performing Arts, as chairman of the Solomon R. Guggenheim Museum Photography Committee, former board member of the Hirshhorn Museum and Sculpture Garden as well as the National Museum of Women in the Arts, as a member of the Presidential Committee on the Arts and Humanities under President Clinton, a board member for the MIT List Visual Arts Center and as a member of the National Board of the Contemporary Art Museum of St. Louis.

Podesta grew up in Chicago’s Third-Ninth Ward as the eldest child in a family with roots in Italy and Greece.

Australia and the United States share a common language, common interests and common values. For Americans, Australia is always an ally we can count on, from Pearl Harbor through 9/11, as well as a leading trading partner. For a political junkie like me, Australia is also an endless source of fascination for the free-wheeling campaign culture that characterizes our fellow democracy.